Home/Uncategorized/Eldeworld Catwoman #3 – How she disappeared part 3

Eldeworld Catwoman #3 – How she disappeared part 3 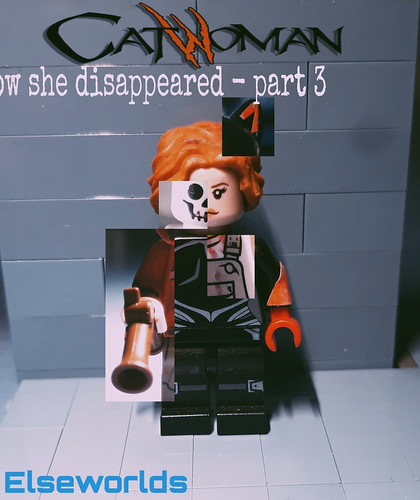 1.
I’ve been looking at the files for a couple of days now. The black and white imagery of a man dismembered and laid out on the pavement on my laptop screen lit my face in the dark. His skull and rubs were taken out.

My eyes had begun to ache from looking at the screen for so long. Normally, I would’ve tried to get in touch with the victim’s friends and family and try to find suspects; their rivals, foes, or anyone who was jealous of them or even hurt by them. I couldn’t do that in this case because the body was demolished to the point where the police wasn’t able to identify them. All they wrote in the file was that he was male, Caucasian, aged 25-40 years old – which was obviously too vague of a description. No fingerprints were found, his skull was taken out of his head, so he couldn’t be identified by his teeth and the victim was nude, so they couldn’t identify him using his personal belongings or his clothes, either.

The second victim was also male, but this one was actually identified. His name was Louie Ferryman (24), he was African-American and worked at a Dairy Queen. He was also found nude, with no personal belongings. His thigh thighbone and pelvis were taken out and his hands were cut off, presumably with a saw. He was identified via teeth.

It dawned on me that the killer must’ve been experienced, because the bodies were mutilated to the point of unrecognizability , except for the second victim, but he was hard to identify because his fingerprints weren’t there and a killer couldn’t have known about identification using teeth, unless they really dug deep into criminology.

The light stung my eyes when I turned it on. I took pictures of the police file, flipping through the file with my gloved hand, making sure I don’t leave my fingerprints. I returned the file to the envelope and messaged Swifty.

Can you come to my place, it’s really important – the message read.

Swifty didn’t reply until about an hour later with a set of messages that read:
What the hell;
Do you know what time it is;
Literally what could be so important;

And then: You know what, idc, I’ll be there in a minute.

Someone knocked at the door just after I woke up from my much-needed nap. I grabbed my phone to check the time. It was 4:40 and Bette had messaged me a plethora of times, inviting me to go out. I hit the ‘mark as read’ option and went to open the door. Swifty stood there with two coffee cups in his hands.

“Why’d it take you so long to get to the door?”

When we were both seated at the coffee table with an envelope on it, I told him that I had fallen asleep. He handed me a coffee.

“I thought you might need this, I figured you were working on something and you could probably use the caffeine.”

“Thanks, I do need it. I have been working late and that’s kind of why I, um, called you here.”

“Yeah, well, I’m working on this murder case and, you see that envelope on the table?”

“Please don’t tell me you need me to break the law again.”

“Fuck.”-He pulled at his amber hair.

“Come on, all you need to do is return this file to the police department.”

“Return? Kate, did you steal this from the police department?”

“Christ, Kate, why didn’t you find some other way to get the information?”

“How else am I supposed to learn this stuff?”

“The same way you did before, interrogate someone, or go to the crime scene…anything but this!”

“Who am I supposed to interrogate? The dead guys?”

“Alright, then why don’t you return it yourself?”

I showed him a screenshot of an article about me breaking into the police department.

“When did this happen?”

“Last night? Today? I don’t even know, I haven’t gone out of the house since then. If I did, someone would see me and all the spotlight would be on me, and when you do what I do, that’s the last thing you want.

“Didn’t I save your ass back during that heist you pulled back in 2014?”

His eyes smiled at me, as dark as the night.

“You’re really milking that one, aren’t you?”

“What the hell do you mean I’m milking it, I saved your life, you ungrateful slob.”

I smiled and threw a cushion at him. He caught it and laughed.

“You’re gonna need gloves for this. Here.” – I handed him a pair of gloves.-“You don’t want to get your fingerprints over the envelope, maybe the policemen noticed the missing file. Good luck.”

He took the envelope. –“Take care, Kate, seriously. And get some sleep for a change. If the circles around your eyes were any darker, you’d be a raccoon.”

“Man, do you know how to make a girl feel special.”
Swifty grinned and left and I got back to the case. I plugged my phone to my laptop with a USB and imported the pictures of the file. I stared at the pictures of the mutilated bodies for so long that it felt like the corpses were staring back at me. I turned off the laptop and took a nap before the gory imagery could drive me insane.

3.
In my dreams, the murder victims were brought back to life and angry at me for not catching the killer. Their bodies were demolished, just like in the pictures of the crime scene.

The unidentified victim without the skull and the ribs dragged himself along the ground and toward me. His face was hollow and pale, it looked like a Michael Myers mask. There were dark and circular holes where his eyes used to be, but I still had a feeling that he could see me – sense me, maybe.
I was walking backwards, far from the undead piece of flesh, when I tripped over something behind me. Now on the ground, I was looking Louie Ferryman, the dead man, in the eyes.

I tried to scream, but nothing came out of my mouth. Louie’s chestnut eyes were dark and bleak. In them I sensed anger and strangely, suffering. It was like he didn’t want to do whatever he was about to do to me, like someone was forcing him. He rose his arms, ending where his ankle was supposed to be. He embraced me with his severed arms. His breath was cold and smelled like the sewers. He didn’t say anything but that’s when I first heard his voice, deep and painful, saying: We can’t rest. We need to rest. Bring us justice.

What followed was a moment of silence that felt like an hour. Just four eyes in the dark. My green searching for his brown ones and finding nothing but darkness. It was cold.
He opened his mouth releasing a splash of cold blood, bad blood. His eyes were wet with tears. He spoke slowly and loudly. His voice was chilling in my head, like nails on a chalkboard.
Justice.

When I woke up I took a shower to wash off all the sweat. I turned on my laptop and nervously tapped my foot while my laptop loaded the home screen. In the top left corner was a file where the police file pictures were storage. I opened a close-up picture of John Doe’s damaged body. His chest was cut open.
The hole was shaped strangely, like the body wasn’t opened with a knife. Except it was. I knew the exact model of knife the victim was stabbed with.

I guess I’ll have to test this out myself, I thought. I searched for the company website. There wasn’t one. I looked up the knife model for sale, but there weren’t any P16 knives being sold. On the Wikipedia page for Pelican it said that the factory closed down in 2004 due to bankruptcy. I slammed the laptop shut and buried my face into my palms. Damn it, I thought, I could’ve sworn I knew who the killer was, but now I have no evidence. Unsatisfied, I opened the police file pictures and thought: You will rest. I will bring you justice.