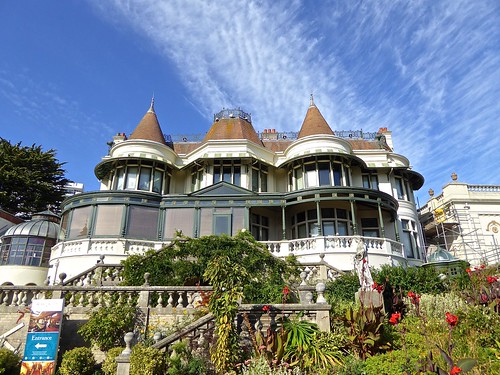 This exotic seaside villa was built by hoteliers, Annie and Merton Russell-Cotes in 1901, as their home. Filled with their extraordinary collection of British paintings and sculptures, as well as souvenirs from their travels around the world. It is a unique Victorian survival in Bournemouth. The house and collection stand testimony to Annie and Merton’s love for each other and passion for collecting. On their deaths in 1921, they gave the house and its collections to the people of Bournemouth to enjoy forever.

This grand art gallery and museum stands in a premium spot atop the town’s East Cliff in a Grade II listed building in Art Nouveau style originally known as East Cliff Hall. It was built in 1897 as a commission by Merton Russell-Cotes, the owner of the neighbouring Royal Bath Hotel as a birthday present for his wife Annie and the first phase was completed in 1901.

Six years later Annie donated it and its contents to the town as a museum and Merton contributed his fine art collection and valuable keepsakes from his foreign travels. In return, the pair were made honorary freemen of the town. They continued adding to the collection and maintaining it until their deaths and in 1922 the Borough of Bournemouth assumed ownership, renaming it after the benefactors as the arts gallery and museum that is here today.

The Russell-Cotes Museum is an art gallery and museum in Bournemouth. It is located on the top of the East Cliff, next to the Royal Bath Hotel.

In 1897, the architect John Frederick Fogerty was commissioned by Merton Russell-Cotes, then the owner of the Royal Bath Hotel, to build a house as a birthday present for his wife Annie. Originally called East Cliff Hall it was built in the northeast section of his hotel’s garden. Built in the Art Nouveau style with interiors by John Thomas and his son Oliver. It was completed in its first form in 1901.

In 1907, Annie Russell-Cotes donated East Cliff Hall and its contents as a museum to the town of Bournemouth and Merton donated his fine art collection. In return they were made honorary freemen of the town. They continued living in part of the house and over the next ten years they paid for an extension to be built and made further donations including the freehold of the site. It was formally opened by Princess Beatrice in 1919. After their deaths the Borough of Bournemouth took over the running of East Cliff Hall and re-opened it as the Russell-Cotes Art Gallery and Museum on 10 March 1922. After Sir Merton’s death, it was extended into his part of the house; a further extension was opened in 2000.

The house and the new annex display various items collected in the course of Sir Merton’s foreign travels, especially to Japan, and paintings from his personal art collection. One room is the Sir Henry Irving Museum; Irving, a friend of the Russell-Cotes’, had stayed in that room. When Irving died in 1905, this room was devoted to his memory. Items purchased at the sale of Irving’s effects formed the basis of the Irving Museum and were displayed with memorabilia associated with his contemporaries such as Ellen Terry and Sarah Bernhardt.

Lord and Lady Russell-Cotes made their money from the Royal Bath Hotel, Bournemouth. They travelled widely and collected extensively; the house was built both to accommodate the collection and entertain on a large scale. In 1908 they presented the house and contents to the Corporation of Bournemouth, though retaining their right to live their for their lifetime. By 1922 both had died and the house and gallery were opened to the public. It is particularly complete example of middle class aesthetic taste. The Display Space contains commissioned sculpture, stained glass and furniture by contemporary artists and designers, in the tradition of the original house.