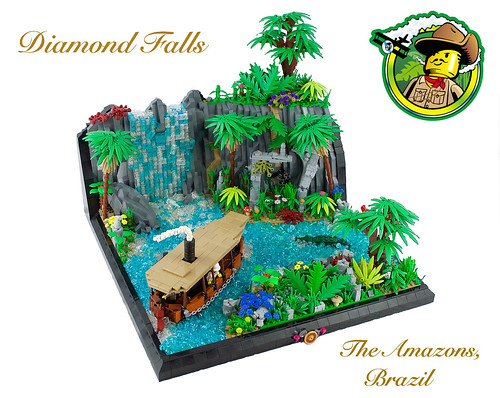 ~~~~~~~~~~~~~~~~~~~~~~~~~~~~~~~~~~~~~~~~~~~~~~~~~~~
Watching a pack of piranha slide by in the murky water, Speed Johnson decided that, however rusty and run-down Slow Nellie was, he would rather be in the boat then swimming in the river with those toothy flesh-eaters.
Although, he conceded to himself, if it turned out Slow Nellie wasn’t as sturdy as her owner claimed, then the piranha may yet get a bite at him.
“Ah, a school of Characidae!” Dr. Kilroy exclaimed, when Speed pointed them out.
“And over there,” Kilroy continued, pointing at the opposite bank, “is a Eunectes murinus, more commonly known as the green anaconda. Females can grow up to fifteen feet in length!” he added excitedly.
“Ugh, snakes.” The third member of their little company muttered in disgust, shuddering.
Speed turned to look over at Adelaide Wolfana, the Tracker for their little expedition.
The German-born blonde clutched her Winchester Model 1910 a little tighter as the large green snake slipped off the bank, swimming lazily past their old riverboat.
“How much farther, Manuel?” Speed called back to their pilot, Manuel Rodira.
The portly Brazilian pushed his cap up on his head and looked around.
“Bout’ another half-mile or so,” he said, adjusting Slow Nellie’s tiller a little and feeding another log into the tired old boiler situated amidships.
Twenty miles back on the little tributary of the grand Amazon River sat Old Emma, along with the other four members of their expedition.
The seven adventurers from Johnson & Thunder, Explorers Inc, had flown down to Brazil after hearing of a tale making the rounds in the Amazon Basin of a secluded grotto on a tiny offshoot of the mighty Amazon.
This fabled grotto supposedly had a sparkling waterfall at it’s center, giving the water a diamond blue color, and held an ancient archway, engraved with Aztec symbols as well as some old pillars and broken masonry. According to the tale, the arch stood in front of an overgrown cave entrance.
Where that lead, no-one could say.
Upon their arrival in Manaus, the little company had discovered that Manuel was the one spreading the rumors, and found he claimed he had in fact seen the place. Fortunately, the Brazilian spoke excellent English, and offered to take them there.
After deciding he was probably trustworthy, they agreed to his outrageous price, hired him and a larger boat, and set out.
Now, as the traveled down the ever-narrowing river, Speed quietly began to wonder if they had made a mistake, and the only thing Manuel was leading them to was a dead end, or worse, an ambush.
Well, he thought, shifting his grip slightly on the Thompson sub-machine gun he held and smiling grimly, there would be a very unpleasant surprise for the would-be ambushers in that case.
“Speed, look,” Adelaide said suddenly, startling him back to reality.
“What?” he asked, as the blonde girl stood on the bench, peering out over the starboard side.
“Oh my,” Kilroy, breathed, and now Speed saw it too; the foot-high stump of an ancient pillar, the gray surface cracked and scarred.
They watched the pillar stump slide by, Kilroy snapping several pictures, before Speed noticed the shoreline behind it.
“Look, there’s more,” he said, pointing as a crumbled wall and several more broken pillars came into view.
Suddenly, from behind them, Manuel said dramatically, “We’re here.”
The three adventurers turned towards the bow.
“Oh my goodnez,” Adelaide breathed, staring in wonder.
“Welcome to Diamond Falls,” Manuel said from behind them.
Slow Nellie had emerged into a small grotto, the river in front of them flaring out into the space, before veering off to their right and disappearing. Overhead, the canopy spread out, leaving a hole in the leafy ceiling through which the afternoon sun shone down.
Directly before them stood the waterfall, tumbling down a twenty-foot high cliff into the lagoon.
The sunlight, shining through the canopy opening struck the waterfall straight on, giving the water the look of liquid diamonds as it tumbled down. A huge jumble of rocks sat to the waterfall’s left, their surfaces slick with spray.
“Magnificent,” Kilroy said, staring up at the clifftop.
“Very nice, but have you seen that?,” Speed said, his attention having been drawn away from the falls.
“Oh, vhat iz zat?” Adelaide said, her question already answered.
“Well, would you look at that,” Kilroy declared, smiling broadly.
There, off to the right of the falls, was a small rocky beach.
On that beach, covered in vines and scrub brush, one side broken off and laying against the rock face, was the archway, the moss-covered symbols visible even from here.
And behind it, yawned the dark opening of a cave.