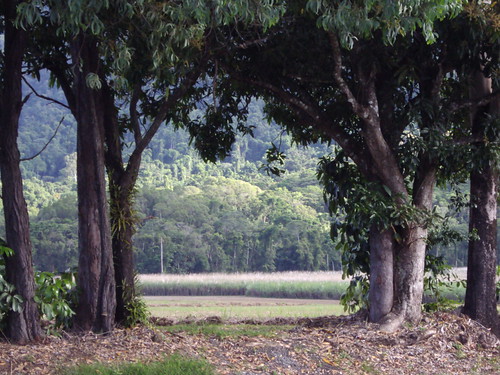 Mossman and Port Douglas.
In 1873 George Dalrymple discovered and named the Mossman River. Dalrymple had tried to set up sheep runs near what was to become Townsville in 1860. When this did not work the Government made him Commissioner of Lands in the Townsville region and he pioneered the town of Bowen. Dalrymple soon resigned and then established the town of Cardwell as a private venture. In 1873 he went on a government expedition to find a port for the Palmer River gold diggings (there were 30,000 men on the diggings almost overnight) and he sailed to the Endeavour River and the newly emerging town of Cooktown. Cooktown was established for the Palmer River diggings. This was the time when Dalrymple discovered the Daintree River and named the Mossman River. Daintree was named after Dalrymple’s friend Richard Daintree, a QLD government geologist who found gold and other deposits in northern QLD. The Mossman River was named after another of Dalrymple’s friends, Hugh Mosman (the spelling of the town was changed to avoid confusion with the suburb of the same name in Sydney) another geologists and mine explorer. Mosman was the man who named Charters Towers when he found gold there in 1872. We visit Charters Tower on Saturday.

Nearby Port Douglas was established in 1877 to cart supplies to the Hodgkinson River goldfields and within a few years farmers had cleared flat land in the nearby Mossman River valley for sugar cane growing. The venture only succeeded because a cane mill was established there in 1883. The long wet season, made sugar a tricky business in the Daintree region. But with government assistance and more growers, a new cane mill was built in Mossman in 1897 with a train system to bring the sugar cane to the mill. This time the enterprise worked and the township grew especially once the train line was extended to Port Douglas in 1900. By 1902 Mossman had 4 hotels, a school, a Catholic Church, a general store and a post office. In the 1930s the town was linked to Cairns with a main road and the old port at Port Douglas declined into a tiny fishing village. Today Mossman is still a sugar growing area and the town has around 2,000 people and the road continues north through the Daintree to Cooktown. Port Douglas has had a revival since Christopher Skase built his luxury resort, the Sheraton Mirage Resort there in the mid 1980s. At that time Port Douglas only had a 100 or so residents. Today it has around 1,000 permanent residents and up to 1,000 holiday makers at peak times!

Australian Red Cedar- Toona ciliata.
Many of us at home have an antique Australian Red Cedar chest of drawers or dining chair or book case. Cedar was the most popular 19th century timber for Australian furniture and mouldings. But the environment paid dearly for our love of this furniture. The NSW forests were stripped of giant cedars first, then southern QLD. The last area remaining to be plundered was the Daintree. Timber getters flocked to the Daintree in 1873 after Dalrymple announced his explorations. Within 3 years nearly 60 ships had been fully loaded with Daintree cedar. No wonder cedar was referred to as “red gold.” It is estimated that some trees were more than 500 years old. Many reached to 60 metres tall. They were giants. But the exploitation was not efficient. Many trees were felled and then left to rot as they were too difficult to float downstream to Mossman or Port Douglas. In 1875 the QLD parliament had an enquiry into cedar felling but with no change of felling policies. By 1885 the cedars were gone. They have not revegetated in the Daintree since. However in NSW Toona ciliate has regrown in some coastal forests quite quickly. In the Australian register of giant trees only one Cedar is listed at a mere 55 metres in height. (Mountain Ashes are listed at over 90 metres tall). Cedar is commercially extinct in Australia but it is still logged in New Guinea and a very small forestry plantation on the Atherton Tablelands. Sugar cane and a bit of dairying replaced cedar felling but timber felling continued well into the 20th century. The last timber mill erected in the area was in 1924 in Daintree village.

Getting the cedars and other produce to market was always a problem for the Daintree area. There was no port although there was talk of a port for the mouth of the Daintree to be called Whitby after the town in Yorkshire where Captain Cook once lived. But nothing eventuated. During the west season Daintree village was completely isolated except for boat access. In the dry season the 30 kms from Mossman still took a full day to complete on horseback. All this changed in 1932 when a road was built from Mossman to Daintree. Once the Great Depression hit some people moved into the Daintree area near Cape Tribulation on a government group settlement scheme with 300 acre blocks. But the farmers were disappointed. After the hard work of clearing the rainforest their crops were destroyed by feral pigs. Some stayed on subsisting on tropical fruits and vegetables. So the start of white settlement in the Cape Tribulation area was in the 1930s. A coastal sailing vessel called into Cape Tribulation once a week with mail and some supplies from the mid 1930s onwards. After World War Two timber felling started in the Cape Tribulation area. Milling ran from 1948 until 1962. But the isolation protected the area from too much development. The road only reached the area in 1955.