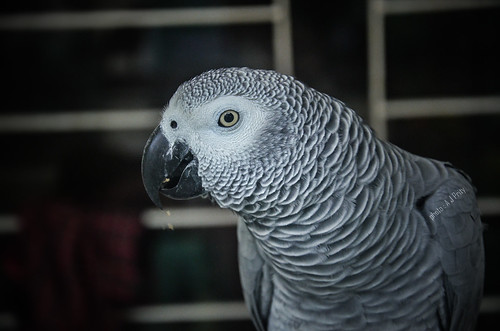 The African grey parrot is a medium-sized, predominantly grey, black-billed parrot which weighs 400 g, with a length of 33 cm. and an average wingspan of 46–52 cm. The Congo subspecies is a lighter grey, with darker grey over the head and both wings, while the head and body feathers have a slight white edge to them. The tail feathers are red. The Timneh subspecies is a darker gray and has a dark maroon colored tail as well as having a portion of their beak being light pink in color. Due to artificial selection by parrot breeders, some Congo African grey parrots are partially or completely red. Both sexes appear similar. The coloration of juveniles is similar to that of adults, but the eye is typically dark grey to black, in comparison to the yellow irises around dark eyes of the adult birds. The undertail coverts are also tinged with grey.The adults weigh between 418 and 526 grams.

African grey parrots may live for 40–60 years in captivity, although their mean lifespan in the wild appears to be shorter at about 23 years.

The African grey parrot is native to equatorial Africa, including Angola, Cameroon, Congo, Côte d’Ivoire, Ghana, Kenya, and Uganda. The Congo subspecies is found inside a range from Kenya to the eastern part of the Ivory Coast, and the Timneh subspecies from the Ivory Coast to Guina-Bissau. Between 120,100 and 259,000 Timneh African gray parrots remain worldwide. Current estimates for the global population of Congo African grey parrots are uncertain and range from 0.63 to 13 million birds. Populations are decreasing worldwide. The species seems to favor dense forests, but can also be found at forest edges and in more open vegetation types (gallery and savanna forests).

A population study published in 2015 found that the species had been ″virtually eliminated″ from Ghana with numbers declining 90 to 99% since 1992. They were found in only 10 of 42 forested areas, and in three roosts that once held between 700 and 1200 birds each, now had only 18 in total. Local people mainly blamed the pet trade, and the felling of timber for the decline. Populations are thought to be stable in Cameroon, and in the Congo an estimated 15,000 are taken every year for the pet trade, from the eastern part of the country. The annual quota is 5,000.

African grey parrots are monogamous breeders which nest in tree cavities. Each couple of parrots needs its own tree to nest. The hen lays three to five eggs, which she incubates for 30 days while being fed by her mate. The adults defend their nesting sites. Both parents help take care of the chicks until they can go off on their own.] African grey parrot chicks require feeding and care from their parents in the nest. The parents take care of them until four or five weeks after they are fledged. Young leave the nest at the age of 12 weeks. Little is known about the courtship behavior of this species in the wild. They weigh between 12 and 14 g at hatching and between 372 and 526 g when they leave their parents.

They are mostly frugivorous; most of their diet consists of fruit, nuts, and seeds. The species prefers oil palm fruit and also eat flowers and tree bark, as well as insects and snails. In the wild, the African grey is partly a ground feeder. In captivity, it can eat sunflower seeds, bird pellets, a variety of fruits such as pears, orange, pomegranate, apple, and banana, and vegetables such as carrots, cooked sweet potato, celery, fresh kale, peas, and green beans. They also need a source of calcium.

The natural predators for this species include as palm-nut vultures, as well as a number of raptors; monkeys target eggs and the young for food. African grey parrots in captivity have been observed to be susceptible to fungal infections, bacterial infections, nutritional insufficiency, malignant tumors, psittacine beak and feather disease, tapeworms, and blood-worms.

Humans are by far the largest threat to wild African grey populations. Between 1994 and 2003, over 359,000 African grey parrots were traded on the international market. Around 21% of the population of the wild birds are being harvested every year. Mortality rates are extremely high after they are captured until they reach market, ranging from 60 to 66%. Mortality among imported birds is high. This bird is also hunted for its meat and for its parts are used in traditional medicines. As a result of the extensive harvest of wild birds, in addition to habitat loss, this species is believed to be undergoing a rapid decline in the wild and has therefore been rated as vulnerable by the IUCN.

In October 2016, the Convention on the International Trade of Endangered Fauna and Flora (CITES) extended the highest level of protection to African greys by listing the species under appendix 1, which bans global and domestic trade in the species.

The species is common in captivity and is regularly kept by humans as a companion parrot, prized for its ability to mimic human speech, which makes it one of the most popular avian pets. They are notorious for mimicking noises around their environment and using them tirelessly. While they are highly intelligent birds, they need enrichment and attention in captivity or they can become distressed; feather plucking is a common symptom. However, they may be prone to behavioural problems due to their sensitive nature.

African greys are also highly intelligent, having been shown to perform at the cognitive level of a 4– to 6-year-old child in some tasks. New experiments have shown that African greys can learn number sequences and can associate human voices with those humans’ faces.[16] Most notably, Dr Irene Pepperberg’s work with Alex the parrot showed his ability to learn over 100 words, differentiating between objects, colors, materials, and shapes.